C++ library for my LED cube

In the last two years I was mainly interrested in exploring C++. One result of my learning is the subject of this post. I started to reimplement the snake game using C++11 for the LED cube. Later I divided the code into two sections. The general part became a base library for creating games or animations. The snake specific code is now only an application, which is based on the general library part. Later, the famous 2048 game was also implemented on top of the library.

The basic classes and interfaces of the library are:

The snake game’s classes are the following:

The main function acts as a factory for the game. It creates a Snake, a SnakeFood, passes them (with the help of ClockDivider_s) to a _Renderer together with a CubeDisplay. Creates a KeyboardInput to control the Snake, gives the Snake and the SnakeFood to a SnakeController, etc etc. Then calls the TimeClockSource_s loop method and the game starts. The gameover is determined by a helper class, namely a _SnakeExitConditionClass, which passed into the TimeClockSource and checked after every schedule round.

An other example application is the LED cube adaption of the famous 2048 game. The values are represented by lighting LED columns at the center of the cube. Each column’s height is the number, which 2 has to powered to get the number value of the place. Hard to imagine, but really easy to play the game this way. Basically if two columns has equal height, the columns can be merged together and the result will be a one unit taller column, representing the twice bigger number in the grid. The classes are:

Just like in the snake game, the main function only wires the game parts together and let the ClockSource to react to the user’s keypresses. That means that here the other, CondVarClockSource is used because the content need to be only rendered when some keypress occured. I’ve created an UML diagram to represent the 2048 game classes: 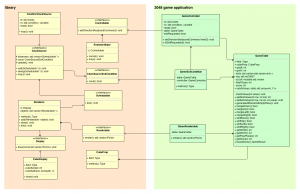 Code is on the github. It is developed as Eclipse CDT projects under Linux.

You can also find some unittests in the repo written in GoogleTest. It was easier to reproduce corner cases with UT instead of eg. solve the 2048 on the cube just to test if the application determines the winning situation :).